How Soccer made me a better Pediatric Dentist

How focus, dedication, and hard work allowed me to live my dream in both soccer and pediatric dentistry. 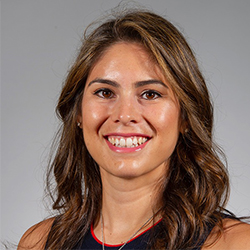 I have had the opportunity of playing on the Mexican Women’s National Soccer Team since 2008. Although it has required discipline, hard work, and careful planning, I’ve been honored to represent my parents’ birth country and embrace my own heritage.

The Mexican team training camps are located in Mexico City. I, on the other hand, was a high school student living in Texas when I joined the team. So, whenever the coach would contact my family announcing camp dates, I would begin by asking my high school principal for permission to miss school for weeks at a time. I had to make promises to my parents and to my school that my grades would not fall due to my absences. Thus, early on, I learned how to balance a rigorous academic curriculum with my passion for soccer.

Eventually, I enrolled at Stanford University, majored in biology, and earned a scholarship to play Division I soccer. With hard work and preparation, I did well in college, and won the starting center back position for the Stanford women’s soccer team all four years. My teammates voted me captain during my last three years—a position that must be earned both on and off the field.

Being team captain requires that you do well in academics, be well prepared, communicate well with diverse people, demonstrate your ability as a reliable and strong leader, in addition to serving as a role model. I am far from perfect, but I believe adopting the right attitude can help pave the road to your success in achieving lofty goals, whether they be with your team on the soccer field or with the office staff in a pediatric dental office.

Our soccer team achieved one such goal during my junior year at Stanford. We won the 2011 Women’s National Championship—the highest honor our team could accomplish in Division I soccer.

Concurrent with my college activities at Stanford, I was called into training camp once again to represent Mexico and play in several international tournaments, including the 2010 U-20 Women’s World cup, the 2011 Women’s World Cup in Germany, and the 2012 Olympic qualifying tournament. During that U-20 Women’s World Cup tournament, I scored a goal against Nigeria to tie the game 1–1. Having scored this game-tying goal, our team was able to advance out of our bracket onto the next stage of play for the first time in Mexican women’s team history. It was an unforgettable moment.

My family was at the stadium watching the game. Making my family and the country I was representing proud continues to be a goal of mine. My family always travelled to attend events when I was playing with Mexico. Even though I was far away from my real home, having my family with me made it feel like I never left. Even now, I find myself dreaming of one day developing a similar sense of close camaraderie in my own dental practice.

After graduating from Stanford in 2013, I postponed my enrollment to Texas A&M College of Dentistry for a year to live out another of my dreams—to play professional soccer in Frankfurt, Germany. This experience with FFC Frankfurt was a character-building one for me. It was humbling not being one of the key players, not speaking the language, not knowing anyone, and living in a new culture, while attempting to stay sharp academically.

My role on the team was to be a “practice player.” Not playing a single minute on the game field was tough, but I believe maintaining the right attitude allowed me to leverage this disguised opportunity and come to a clearer understanding of my role in the bigger picture of life. I embraced the challenges and made the best of that incredible year.

Beginning dental school in 2014 at Texas A&M, I found it to be an amazing and rewarding experience. I was able to continue playing international soccer with the Mexican National Women’s Team and even managed to travel abroad many weekends to compete with the team. I brought my lecture notes and books along as my travel companions. Focusing on my goals and keeping a positive attitude allowed me to keep up with my dental school assignments and earn competitive grades, while also participating in the 2015 Women’s World Cup and the 2016 Olympic qualifying tournament.

Throughout my dental school career, I’ve come to see that pediatric dentistry is a challenging yet rewarding specialty. I arrived at this conclusion through observation in both clinical and private practice settings. More specifically, I’ve been privileged to have the opportunity over the years of shadowing my mother, a pediatric dentist, as she interacts with her staff and pediatric patients in real-life situations.

ACCOMPLISHMENTS ON THE SOCCER FIELD

As a left center-back, #4 GARCIAMENDEZ defends the area directly in front of the goal, and tries to prevent opposing players, particularly center-forwards, from scoring.

POSITION AWARENESS AND COMMUNICATION ARE KEY IN DEFENDING YOUR GOAL.

I have observed that in a pediatric dental practice, the dentist and staff need to work together as a team to provide excellent service to their patients—a lesson I learned well growing up playing sports. From my experience playing soccer in Germany, I learned what it takes to be a “team player.” I also know what it takes to be a “team leader” based on my experience at Stanford and with the Mexican national team. Collaborating and communicating clearly with teammates are essential skills—skills that were imperative on the soccer field and will continue to be during my residency and eventually in my own pediatric practice.

Although I am now retired from my professional soccer career, I remain strongly connected to the mental aspect of the sport on a daily basis. Reflecting on my career so far and comparing my past experience as a competitive athlete with my new role as a pediatric resident, I notice that the stress of competing on the field differs from the stress of competing in an academic setting. These diverse types of experiences induce two different kinds of stress.

The stress that comes with representing an entire country is tremendous. You feel an external pressure from millions of supporters who are watching to see if you make the right decision, to pass or tackle, and you must make that decision in a split second. If you miscalculate and make a wrong decision, your team suffers consequences on the field. On the other hand, I find that the stress of performing academically in dentistry is more of an internal pressure. I want to be a strong professional and portray myself that way to my patients and “attendings,” realizing all the while that my decisions in the dental setting also result in consequences that will affect my patients.

In summary, let me share three bits of wisdom I have learned during my soccer career which I believe will help me be a more successful and effective pediatric dentist:

1. Accept criticism well. Teammates and coaches routinely critique a player’s decisions during the flow of a game. It is important to accept this critique, learn from it quickly, and move on. Throughout residency, the “attendings” give us feedback after every patient. We must be prepared to accept positive feedback and to learn from corrective criticism.

3. Work hard and be patient. If things don’t go my way on the field, I remind myself to be patient and to keep working hard. This advice applies equally, whether you are playing soccer or practicing pediatric dentistry.

Following these three bits of advice has enabled me to enjoy success on the soccer field. I am confident they will also help to ensure my future success as a pediatric dentist.

Alina Garciamendez, DDS
Dr. Alina Garciamendez completed her dental training and received her DDS degree in 2018 from Texas A&M College of Dentistry in Dallas, Texas, where she is also currently enrolled as a pediatric dentistry resident. Previously, she attended Stanford University on a Division I soccer scholarship and graduated in 2013 with a BS degree in biology. Dr. Garciamendez was born in Los Gatos, California, but grew up in Fairview, Texas. She also competed as a member of the Mexican Women’s National Soccer Team, beginning in 2008 when she was a high school student.