Looking back over 25 years of clinical dental practice, I realized that stainless steel crowns (SSCs) had become my benchmark restoration for the management of severely broken down first and second primary molars. 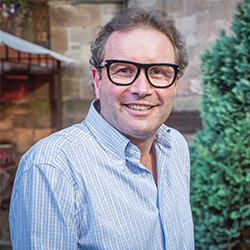 Looking back over 25 years of clinical dental practice, I realized that stainless steel crowns (SSCs) had become my benchmark restoration for the management of severely broken down first and second primary molars. Having had such a high success rate using SSCs, it was difficult for me to consider using any other form of restoration.

Over the years, however, parents often had asked me, “Do crowns come in any other color?” The answer up until about four years ago was always, “No.” Some companies have tried to powder coat the crowns or incorporate composite/porcelain facings. Many of these crowns have failed, resulting in the kits being placed into a cupboard to collect dust.

Western Australia has a strong pediatric dentistry heritage established by my mentor, Dr. Peter Gregory, following his return in 1982 from Northwestern University Dental School and the Children’s Memorial Hospital in Chicago. Based on his training, Dr. Gregory strongly advocated the use of SSCs and composite resin strip crowns by West Australian dentists. Both restorations continue to be the mainstay of clinical pediatric practice in Perth.

Dentists in our community did not seriously consider moving away from this treatment modality to an alternative until relatively recently. In fact, I initially still placed composite resin crowns on a regular basis and was only looking for an alternative to the SSC. My restoration of choice for a primary canine, however, has now changed from a composite resin strip crown to an EZCrown.

How did I make this switch and what prompted my decision? My experience is as follows.

I had noticed an increase in the number of parents seeking an alternative to SSCs based solely on esthetics. I also had noted that other parents were concerned more about the nickel content of SSCs and an associated possible allergic response.

Then in 2012, I attended the EAPD conference in Strasbourg, France, where several companies were showcasing their biocompatible Zirconia crowns for primary dentition. After much deliberation, I purchased a starter kit from the Sprig booth and returned to Australia.

Australia’s Therapeutic Goods Administration did not grant approval until later that year, so I was restricted to practicing on extracted teeth. I soon realized that I needed a professional kit and placed my order. Since I was one of the first dentists to adopt Sprig crowns in Australia, I relied heavily on “trial and error” practice, initially confined to the laboratory. Dr. John Hansen from Sprig was extremely helpful during this learning phase, and we spent a considerable amount of time on Skype discussing several clinical issues.

Once I felt confident with my preparation technique (which I significantly modified after attending Sprig University!), I then began offering Zirconia crowns to a select group of patients. I decided to limit my first 50 cases to patients whose treatment plan included only a single, full-coverage restoration on either a first or second primary molar. Parents of these patients had also requested an alternative to an SSC. Furthermore, I excluded patients if they had significant para function, dysplasia of the dentition, or special needs.

Being the first dentist in Western Australia to offer this treatment, colleagues were eager to see my results. Because of this expectation, I needed to be confident in the long- term success of Sprig’s Zirconia crowns before recommending them. Also, a vast majority of the patients I treat have behavior management issues, requiring treatment under relative analgesia or general anesthetic. Thus, I faced the additional possible complication of having to repeat the treatment due to a restoration failure—an outcome that is in no one’s best interest. Would Zirconia crowns meet the test?

“THE RESULTS WERE EXTREMELY ENCOURAGING WITH A 100% SUCCESS RATE.”

I treated the first 50 consecutive patients over a period of 24 months using Sprig Version I crowns. The results were extremely encouraging with a 100% success rate (mean review time of 23 months). In 2015, I presented my results at the IAPD conference in Glasgow, Scotland. I am now continuing my study, using Sprig’s V2 crowns and extending it to include the first 150 consecutive cases. I plan to share these study results later this year.

After four and a half years, I can now confidently say, “I would be happy to place an EZCrown, even if the patient was my own child.” Being able to make this statement has always been my yardstick by which to evaluate and recommend treatment. I am confident my patients are receiving the very best of care with Sprig’s products.

Mark Foster BDS, FICD
Mark Foster, BDS, FICD has a dental practice that is limited to the treatment of children and special needs patients. He is a consultant at Princess Margaret Hospital for Children and a senior lecturer at the University of Western Australia.