Making a Permanent Difference with Zirconia Crowns (5-Year Follow Up)

A dentist from Romania places Zirconia crowns to last a lifetime. 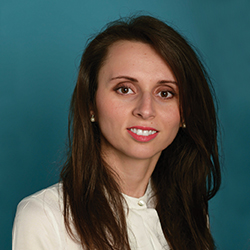 Patricia first came to our clinic with her mother when she was 7 years old. She was quite shy, and I could tell that she felt very uncomfortable. Her mother told me, “My daughter has experienced dental pain before and has to take medicine in order to calm the symptoms.” Patricia had experienced a lot of pain during prior treatment at another dental clinic and didn’t want to endure a similar experience again.

When I proceeded to examine Patricia, I could see several of her teeth were decayed. She told me her lower molars were giving her a hard time. I could see that teeth K and T were the most affected with evidence of massive dental destruction. I noticed that T also had a vestibular abscess. To be honest, I was nearly convinced we would need to extract those teeth due to the extensive damage. Furthermore, lesions had already led to infection.

For the next appointment I asked her mother to bring me a panoramic X-Ray so I could see all Patricia’s teeth and assess the amount of root resorption in order to know how to treat her teeth. When I received the X-Ray, I was surprised, disappointed and challenged all at the same time. I saw that the adult permanent teeth were missing and noted accompanying extensive bone damage. Patricia’s parents were shocked and discouraged when they found out that she was experiencing hypodontia in addition to having decaying second primary molars.

I knew right away that I needed a second opinion on this case, so I asked my friend, Dr. Teodorina Secara, our Orthodontic specialist, for some advice. She advised me, “Try to keep the two damaged teeth in Patricia’s mouth if at all possible, given the fact that she already has too much space between her teeth.”

The loss of these two primary molars would disrupt the relationship between the rest of her teeth, and in the end, impact her entire occlusion.

I took on the task of resolving this case as a personal challenge. Because the permanent adult teeth were missing, I couldn’t afford losing the second primary molars. I didn’t know how this case would end up, so I started by taking it one step at a time. In the beginning, I treated the root canals of those two damaged and infected teeth with antibiotics and anti-inflamatory medications.

MY FIRST THOUGHTS: I was nearly convinced we would need to extract those two damaged and infected teeth with antibiotics and anti-inflammatory medications.

After 10 days, I filled the root canals of both teeth using the standard procedure for permanent teeth. On K, I also encountered a furcal perforation and although it was very difficult to stop the hemorrhage, we managed eventually place MTA on it. We filled K with Equia GC and T with Gradia Direct GC. Everything was going well so far.

FAST FORWARD: I took on the task of resolving this case as a personal challenge.

Two weeks later, while I was treating the rest of Patricia’s teeth, I spotted through the enamel that K had begun to turn black underneath the Equia filling. Also, T, due to the extensive nature of the filling and the small remaining healthy dental structure left after removing the decay, had begun to exhibit fissure lines. It was just a matter of time until that tooth would break, requiring an extraction, in spite of all the hard work done to save it. This was not a scenario I was willing to accept. At that point, I knew I had to come up with an alternative idea in order to help Patricia retain her second primary molars, and I had to do it fast.

At the time, we only had SSCs available in our clinic, and I had used them in the past. I knew I had to reinforce these damaged molars if we wanted to keep them. But what I most wanted for Patricia was an esthetic solution for her situation that would prove durable over time, because these primary molars would never be replaced by permanent teeth. In addition to being esthetic, the ideal restoration would also need to be extremely strong, able to withstand all the bite forces over a lifetime. SSCs were not an option for me or for my patient. I refused to believe that I had reached the end of the road, so I began doing some research on the Internet to find what other esthetic pediatric options were available.

I was surprised, disappointed, and challenged all at the same time.

That is when I discovered that such a restoration option did in fact exist, having all the characteristics that I had been hoping for. Sprig EZCrowns also seemed to satisfy both the needs of my patient and the desires of her parents. Usually, when you diagnose a young patient with hypodontia and talk to the parents about it, they perceive the diagnosis as a handicap; or they feel ashamed for having done something wrong that led to the situation. Now, however, it was such a joy and a relief to be able to share the option of using Zirconia crowns when faced with such a difficult circumstance.

After assessing Patricia’s situation, I shared the good news of my discovery with her parents and proposed using Sprig crowns. They were excited about the fact that the crowns had the same color as natural teeth and gave me permission to proceed. I told Patricia that she would no longer feel any pain. She was excited to learn that instead of two “injured” teeth, she would be getting two beautiful “pearl-like” teeth.

Anticipating the case, I was nervous because this would be the first time I had ever used Zirconia crowns. However, I managed to seat both crowns in the same session. In the end, Patricia was extremely excited with the result. During the entire process of discovering Zirconia crowns and preparing for the case, I found the Sprig team to be most helpful and responsive in communicating with me.

At Patricia’s two-week check-up, I was surprised to see how beautifully the gingival margin had healed and to discover that the crown contour was nearly perfect. I was impressed by the fact that both crowns looked so natural that you could barely notice any difference between the Zirconia crowns and Patricia’s natural teeth. I was thrilled with the result and so were her parents! But what I most anxiously wanted to see was how well these crowns would perform over time. Would my patient be able to use these two crowns à la longue (over the long term)? Therefore, I determined to monitor the Sprig EZCrowns to see how they would hold up after prolonged use.

I saw Patricia regularly for follow-up exams and carefully examined her. At six-month and one-year and six-month follow-up appointments, I took photos and x-rays of her teeth. They still looked impeccable. Her first permanent molars erupted in their right places. I couldn’t detect any wear of the opposing teeth, and the crown margins were subgingivally placed, revealing healthy surrounding tissue. The x-rays showed that the bone had re-mineralized and healed.

In summary, Patricia uses these new “teeth” as if they are her own natural ones. After we placed the Zirconia crowns, Patricia began taking personal responsibility and paying more attention to proper dental hygiene. She now enjoys coming to her appointments because she knows we will take pictures every time. I think Zirconia crowns are a necessity in this kind of situation when you have to deal with missing permanent teeth.

When I promote these crowns to parents, I now feel confident recommending Zirconia crowns. At the same time, I am able to honor the trust which parents have placed in me by providing the best available solution when treating special dental conditions such as hypodontia. By incorporating all the benefits of Zirconia crowns into your practice, you, too, will increase your chance for success. Above all, you will live with a strong feeling of professional satisfaction knowing that you can overcome even the most difficult situation.

Every time a patient revisits our clinic for a checkup appointment after a long absence, I feel a sense of excitement. I’m eager to check each patient’s dental status to see how the treatment plan we adopted has impacted their quality of life.

Now, almost five years later, our choice to use Zirconia crowns has been rewarded, and Patricia’s teeth continue to look astonishingly natural. Based on the latest X-rays taken during a recent follow-up exam, we can now confirm that the final results continue to look amazing, despite the rough start.  Patricia, who is almost 12 years old now, is no longer shy, and I can tell by the brightness of her smile that she is full of confidence. Since her initial visit, she has developed into a young girl with abundant enthusiasm and is not the timid child who first stepped into our office.

The Zirconia EZCrowns (Sprig Oral Health Technologies, Inc.) have literally demonstrated their quality reputation as la pièce de résistance. Although both second primary molars have been treated endodontically as if they were permanent teeth and the mesial root of tooth T shows evidence of resorption, Patricia has experienced no clinical symptoms.

The contour of the gingival margin is still placed at a physiologically appropriate height. Compared to her natural teeth, you can see only insignificant signs of gingival inflammation, likely due to the still superficial personal dental hygiene habits so commonly practiced by preteens in Romania.

One of my biggest concerns when I initially placed Patricia’s Zirconia crowns was how they would hold up over the long term. Would they be abrasive and damage the opposing natural teeth? Although Zirconia crowns are glazed and smoothly polished, they still have a harder surface than natural teeth. However, to my surprise, every time Patricia arrived for a clinical exam, I was unable to observe any notable pathological sign of dental abrasion on her opposing teeth.

Today Patricia experiences no issues with her mastication or occlusion. Furthermore, and most importantly, she enjoys the amazing aesthetics of a beautiful smile. She is experiencing excellent oral health, and when I talk to her, I sense her feeling of well being at having a beautifully restored smile.

Although both molars had a guarded prognosis, five years later, Ana Vinau, DDS and Patricia are still pleased with the results of her Zirconia restorations.

Ana Vinau, DDS
Dr. Ana Vinau works as a pediatric dentist at Dent Estet 4 Kids and is currently practicing at a clinic in Timisoara, Romania. She is a member of numerous pediatric dental teams, founded by Dr. Oana Taban in 2008. Dr. Vinau received her dental degree from the Victor Babes University of Dental Medicine and Pharmacy, Timisoara, and recently completed her master’s degree in periodontology. She is also currently studying for another master’s degree in orthodontics.